Steel framed buildings started appearing in the late 19 th and early 20 th century with structural steel allowing lighter and thinner masonry cladding. The first were in Chicago, soon copied in London and spreading throughout North America and the UK. The thinner brick, stone or terracotta cladding which was “buttered up” to the steel frame with mortar made for poor long term corrosion protection and in the 1980 severe corrosion problems leading to dangerous cracking and movement of masonry lead to what is knows in England as “Regents Street Disease” with many central London Department Stores and Hotels suffering. By this time many of the buildings in questions were historic listed structures and the conventional repair techniques of dismantling the cladding, applying protective coatings to the steel and rebuilding the facades were proving to be expensive and disruptive. It was also difficult to achieve a good finish on the rebuilt areas with no guarantee that further repairs would not be needed later.

Installed probe anodes on the exterior of a steel framed building with connections in conduit: 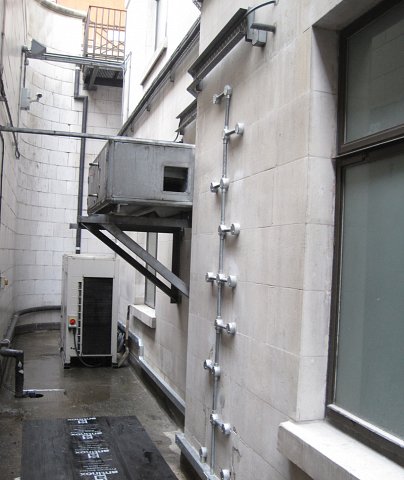 Broomfield Consultants work in the field of analysing the problem and applying impressed current cathodic protection is summarised in my plenary paper at the 2008 International Corrosion Conference in Las Vegas and in Materials Performance.